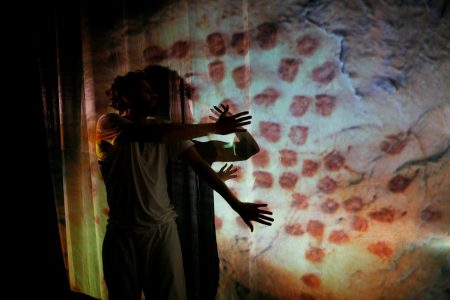 We are looking for something primitive: a memory from before our birth. Something obvious, we all carry and that evolves within us: the first gestures of the first men. Between art, science and technology, our research tends to a virtual scene of rock art in action. Assuming that the cave paintings are the traces of oral performance or dance rites, they have been used as transmission and communication media for the knowledge of surrounding and environments of the early men (hunting, myth, history, art or religious content, shamanism). Through the scope of these fragmentary traces of history, we are seeking to reconstruct various performative scenarios echoing the paintings of the Chauvet’s cave.

In order to establish the experimental protocol based on the data found in the literature, we work out various scenarios:

More explorations are to come for the next workshops.